In 1824, Samuel Moore, a North Carolina Quaker, laid out the plans for the land he purchased for $2.00 an acre in 1823.He called it Mooresville, after his last name. Samuel chose thislocation because of the delta that laid between the east and west forks of White Lick Creek. This land had a fertile bottom ground and water to power mills. He set aside 16 lots within four 5 acre blocks. Mr. Moore would not allow a public sale of the lots, but gave the lots to desirable citizens.

Asa Bales built the first cabin in the town. Samuel Moore Rooker was the first child born in town and was named for and by Samuel Moore. Mr. Moore constructed a frame building on the northeast corner of the public square, from which he sold his merchandise.

In 1826 Alexander Worth & Company opened the second store and also built a wollen mill. The first school society in Mooresville was organized in Samuel Moore’s store in 1828.
Also in 1828, Samuel Moore married Eliza Worthington of Madison, Indiana. Eliza was a Methodist and both the Quaker and Methodist denominations were prominent in the early development of the community.

Mooresville adopted “Home of the State Flag” as its slogan in 1966, in honor of Paul Hadley, the Indiana state flag’s designer. Mr. Hadley was a well-known watercolor artist and lived in Mooresville for many years.

Mooresville adopted “Home of the State Flag” as its slogan in 1966, in honor of Paul Hadley.

Modest … Soft-spoken … Dignified … Witty … These descriptions of longtime Mooresville resident Paul Hadley, designer of the Indiana State Flag, reflected the community and state in which he was raised. Born in Indianapolis on Aug. 6, 1880, Paul was one of four sons of Dr. Evan Hadley, M.D., and Ella Quinn Hadley. He switched from Indianapolis (later called Shortridge) High School to Manual Training High School to study art under Otto Stark, one of the famous Hoosier Group of impressionist painters. Paul then studied at the Philadelphia Academy of Fine Arts & the PA Museum & Industrial Arts School. He first specialized in stained glass and interior designs, working for Philadelphia and Chicago firms. Paul helped design the Kennebunkport, Maine residence of Hoosier writer Booth Tarkington. Paul was named “most popular artist” at the 1922 Indiana State Fair. He did not drive a car; instead, he hiked cross-country to paint the scenic views. His ability to capture the essence of his subjects was matched by superb use of color and realism, softened with impressionistic tones.

Out of 200 proposals, Paul’s design for the Indiana State Banner (changed to Flag in 1955) was selected in the state’s 1916 Centennial Celebration, and the Indiana General Assembly adopted it in 1917. The flag’s flaming torch and six radiating beams from the torch symbolized the expansion of liberty and enlightenment. The 13 stars represent the original 13 U.S. states; the five inner stars represent the next five states admitted to the Union. Indiana is the largest star atop the torch.

As an art instructor at the Herron School of Art (1922-1933), he specialized in watercolors and outdoor sketches. Paul became Assistant Curator of the Art Association (1935-36). He travelled the country, capturing distinctively local scenes that defined mid-20th century Hoosier and American culture. He lived in Mooresville, Plainfield, and, finally, Richmond, IN, where he died on Jan. 31, 1971. 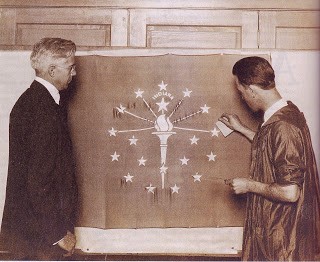